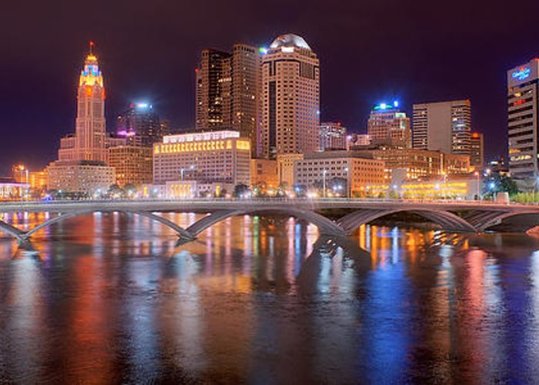 Hop on the bus and join us for a quick yet relaxing escape into Ohio's paranormal secrets while sampling some of their best adult beverages. The adventure starts in Columbus but ends in Cleveland.


One of a kind paranormal experiences, movie sites, breweries, wineries, and distilleries. What more could you want?

Day 1- Columbus - We will meet up with those flying in at John Glenn International Airport in the morning.  We will have lunch, on your own, at the famous North Market, as seen on many foodie tv shows. Did you know the parking lot actually sits on top of a graveyard? Many souls were not moved before paving and still wander the area.

After lunch we will head to Camp Chase Confederate Camp and graveyard. Civil War POWs were held here and many died from poor conditions.  The cemetery looks very orderly but research has shown that there is really a mass grave of bodies.  Will we catch a glimpse of the gray lady?

Then on to the Statehouse. Will Tom Bateman greet us? He has watched over the Senate for decades after his death.  Or perhaps we will see President Lincoln who rested in the rotunda on his way home after his assassination.

We will then grab a bite to eat and sample some of Columbus brewed BrewDog before heading out with Columbus Booze and Boos bus tour.  At the end of the night, we will retire to the Drury Inn Downtown.

Day 2 - Southern Ohio - Early in the morning we will take off to cover a lot of ground. Our first stop will be Serpent Mound.  This is one of those mysterious creations made by an ancient tribe of unknown people.  It mystically aligns with all 4 solstices. Some believe it to be older than Stonehenge. One of the few US UNESCO World Heritage Sites.

Then we will head east and jump across the Ohio River to Point Pleasant WV to visit with the Mothman.  This is one of the most documented cryptid encounters in the US.  This is the filming site for the movie Mothman Prophecies starring Richard Gere.  We will visit the Mothman statue and tour the museum. This is a lunch stop with many small town diners.

Back in Ohio, we will travel further east to Athens and learn of the strangeness of Ohio University. As we follow the river further east we will come to Marietta and the Lafayette Hotel and it's ghostly tales.

After a long day of mysteries, we are going to kick back and party hard with the gang at Shadowbox LIVE back in Columbus. We will enjoy a show of laughs and rock and roll, with optional food and drinks available.  This venue is located in the hip Brewery District and on the free  CBus line back to your hotel.

Day 3 - Amish Area - After another breakfast at your hotel, we are headed northeast to what is considered Amish Country in Ohio.  This area is full of wine, cheese, and Amish home-cooking.

The first stop is Zoar Village. We will learn of the history, the tragedies, and the lingering souls around this village.  But walking makes you thirsty so our next stop is Breitenbach Wine Cellar where you can sample some of Ohio's best wine and cheese. Next is a photo op with the World's Largest Cuckoo Clock. After that we will stop for lunch at the famous Der Dutchman for home-style food that is sure to please.
Now, let's walk off lunch with a walking History, Haunts and Legends Tour in Hanoverton including the Spread Eagle Tavern.  Afterward, we will journey back to Columbus for your final night in this capital city. Return to the Brewery District, discover the Discovery District, hop into the Short North, or relax in the Arena District. All of these are within walking distance of your hotel or on the free CBus bus line.

​Day 4 - Mansfield - This is a day for movie buffs. After saying goodbye Columbus, we are headed to Malabar Farm. It was built by Pulitzer Prize-winning author, Louis Bromfield and it is also the site  of the wedding of Humphrey Bogart and Lauren Bacall. Nearby Pugh Cabin was used in the cabin scenes of Shawshank Redemption. Also on the property is the Ceely Rose House.  Ceely Rose was a young girl who murdered every member of her family by poisoning them with arsenic. The house was featured on an episode of Ghost Hunter.

The Pugh Cabin starts us on the Shawshank Trail which winds through the area and highlights locations used for Shawshank Redemption.  As you might guess, the trail ends at the prison, the Ohio State Reformatory.  The Reformatory has been the set for many movies and music videos. It also has many ghosts. We will tour the facility and learn of the films and the haunts.

As we end this day, we will be in Cleveland, and Cleveland ROCKS!  We will be staying in a lively part of town near the House of Blues, the Hard Rock, and the theatre district.  There is plenty of places have dinner or enjoy the night life.

Day 5 - Cleveland - After breakfast at the hotel, we are ready to see the sites of Cleveland. First stop is the Rock and Roll Hall of Fame.  This is a large collection of personal items from many rock greats.  You can feel the energy buzzing off of many of the items.  Next spot is the Buckland Museum of Witchcraft and Magick. Very small in contract to the Rock Hall but powerful in it's own right. Next it is off to Great Lakes Brewery for some local suds and a bite to eat. Next stop is the Flats.  In the 70s, this was the area where the river was burning.  Now this is a vibrant food and drink area. Sample some other local craft beers or walk along the boardwalk. We will meet our Cleveland Ghost Bus here and they will take us to the many haunted sites of Cleveland and tell us tales of their spooky history.